Hui said:
.
One cause of this is filling up too far and fuel making its way into the Evap canister which effectively blocks it.
Click to expand...

There is no evap canister on Australian bikes.
H

K1W1 said:
There is no evap canister on Australian bikes.
Click to expand...

All Ducati's leaving the factory 2017 onwards have evap canisters. Before that it depended on the market. Californian markets have always had them.
I was only trying to help in a small way find the fault here, evap canister or not my thoughts were either a blocked evap canister or just a plain blocked breather, same thing in my book.
K

In that case where is it located?

K1W1 said:
In that case where is it located?
Click to expand...

It varies from model to model (ie. Diavels etc.) but on the newer Scrambler it's on the right side behind a cowl similar to the oil cooler that's located on the left. Early Scramblers had them stuck on in full view low on the left.
K

Hui said:
It varies from model to model (ie. Diavels etc.) but on the newer Scrambler it's on the right side behind a cowl similar to the oil cooler that's located on the left. Early Scramblers had them stuck on in full view low on the left.
Click to expand...

I guess our 2017 build bike lost its canister somewhere between Thailand and Australia then. 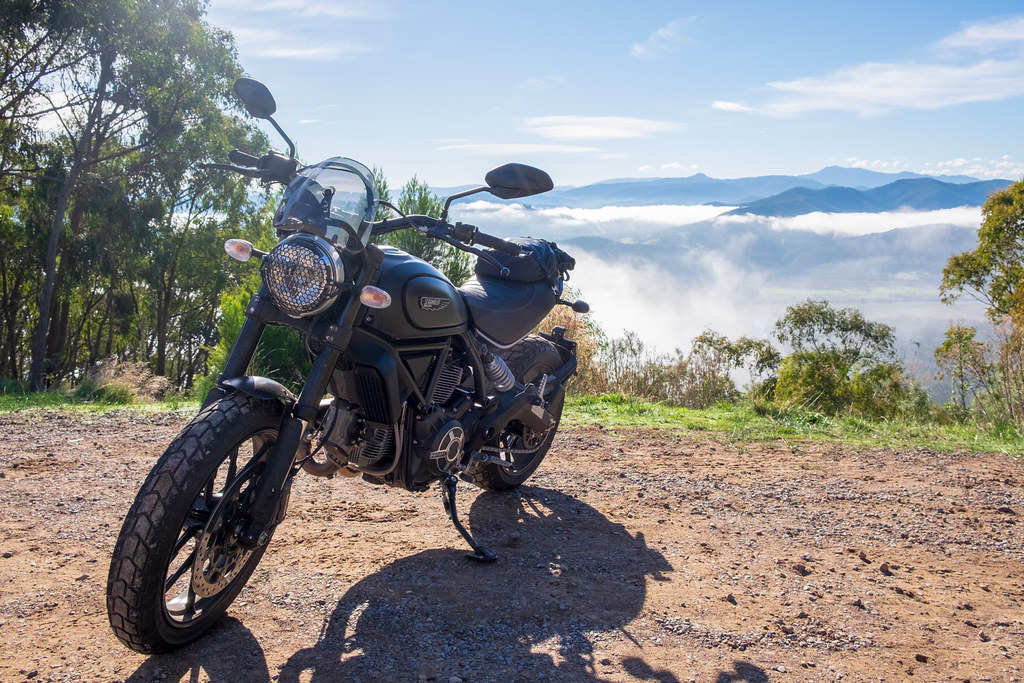 K1W1 said:
I guess our 2017 build bike lost its canister somewhere between Thailand and Australia then.

I reckon you just missed them K1W1 – I had a poke around at the dealership recently here in Sydney and they all have them.

Joined Nov 18, 2016
·
2,965 Posts
^^ the first bikes that got the canisters behind the right side panel were the Desert Sled, and the Cafe Racer in 2017. The other (existing models) followed a few months later afaik. Same with the soft throttle tube.

Maybe yours just slipped through the cracks of a model update?

Max Kool said:
^^ the first bikes that got the canisters behind the right side panel were the Desert Sled, and the Cafe Racer in 2017. The other (existing models) followed a few months later afaik. Same with the soft throttle tube.

Maybe yours just slipped through the cracks of a model update?
Click to expand...

They were definitely late coming to Australia, Sydney, NSW at least. I remember seeing bikes fitted with them on this forum when I joined up, pretty much as soon as I got the bike in 2015 and noticed we didn't have them here. Thank god because in those days it was a bit of an afterthought stuck on the side there. All the new bikes I've seen at least have it integrated into the design so it looks a little neater if you notice it at all.

Seems like a easy DIY to remove (re-route drain & breather hoses) if you already have the tank off.

Disclaimer: I'm not actually sure if you in fact you need to have the tank off to delete the EVAP.

Joined Jun 29, 2018
·
881 Posts
Don’t know about removing evap and what benefit there is. If I did want to do the job where would I reroute the hoses to. I don’t really know what the evap does. Please explain to me in very short easy to understand sentences.

Joined 10 mo ago
·
106 Posts
It is supposed to re-absorb the fumes from the gas tank vent, to prevent them from escaping to the atmosphere.

Waaay back when, California had them required, so often makers in the US had a 49 state version (without the canister) and a California specific version with the canister. Now in the US there is usually only 1 version of a given vehicle, so they all have the canister.

There are some threads on here dealing with removing it on the 800. Generally, there are 2 lines that need to be addressed when the canister is removed, the vent and over-flow. I can't remember but they need to be re-routed safely towards the ground, for example if the tank overflows with go to the ground.

Supposedly one of the benefits is that it prevents the bike from stalling (due to vacuum lock) from having a canister that is soaked in fuel, caused by filling the gas tank too much or a bike tip over. Also it drops some weight (however small) and aesthetics (on the 800 it was kinda hanging off the bike like an after though).

Max Kool said:
The way they installed it, I can't see how removing it will be benificial... it's well hidden.
Click to expand...

I thought you removed yours and fitted the older cowl? Maybe thinking of something else ages ago. I seem to remember someone mentioned fitting a tool kit or such like in the vacated space.

(I was referring to the drawing of the 1100 Scrambler, where the evap can seems to be in a different location)
C

DSUE2015OZ said:
Hi
Hoping someone might be able to help or at least advise if they have had the same issue with their Scrambler.

My Urban Enduro 2015 has had an issue for over 12 months that my local Ducati dealer (with help from Ducati in Australia) has not been able to resolve with the idle.

The bikes revs drop on idle to a point where the headlight begins to dim and flash with the RPM's bouncing and eventually stalls.
When riding, the bike coughs an jerks to the point of being dangerous. The issue is intermittent and can occur when the bike is hot or cold. Some days it is fine and others it is a struggle to control and am losing confidence in the bike.
The best way I can describe the issue under load is like a bike reaching the rev limiter and it just coughs and snatches jerking the bike and rider back and forth like it is running on a single piston.
Sometimes I get an ENGINE error on the dash.

The dealer has done the following (on the many visits I've had):
1) Run diagnostic reports which do not show any problem;
2) Adjusted the stepper motor and parameters - this seemed to show improvement, but did not resolve the issue and after a few rides returned back to the way it was;
3) Corrected an issue with the relationship between the idle speed control valve and the throttle valve butterfly - this also showed improvement before returning to the way it was.
4) Replaced the MAP sensor.

Hoping someone has experienced the same and can provide a solution... I love the bike when it is running smoothly, but when this issue kicks in I feel like running it off a cliff!!

I have a video of the issue but the site won't allow it to be uploaded due to the size of the file.
Click to expand...

Have the same problem, it sounds identical. 4 times been taken back to dealer of course first 2 times they said there was nothing wrong third time dealer changed MAF; still doing it now back to dealer. let you Know if they admit to anything.
21 - 40 of 52 Posts
Join the discussion
Continue with Facebook
Continue with Google
or sign up with email
Recommended Reading
Read More
Read More
About this Discussion
51 Replies
13 Participants
Last post:
DSUE2015OZ 2 mo ago
Ducati Scrambler Forum
A forum community dedicated to Ducati Scrambler owners and enthusiasts. Come join the discussion about performance, accessories, exhaust, reviews, troubleshooting, maintenance, and more!
Full Forum Listing
Explore Our Forums
Scrambler Talk Scrambler Pictures/Videos Scrambler Gear & Accessories Community Help Scrambler How-To's and Guides
Popular Communities